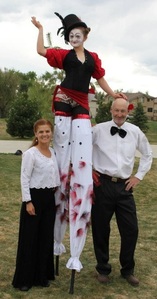 Aerial Animals is a family-owned business located in Golden, Colorado.  We spent five years sailing around the world www.infidien.com. On our last long passage across the Atlantic toward home, we sailed in the company of a boat whose owners were former world-class circus performers. I remember sadly thinking that we'd never meet such interesting people when we moved back to land - little did I know what awaited us!  Daughter, Jessie, spent much of her free time on the boat playing in the rigging and doing "circus" shows. When we moved home, Jessie and Patti joined Colorado's flying trapeze club, The Imperial Flyers, and Jessie's interest in circus became a passion!

Aerial Animals was founded in 2010 by Patti to promote Jessica’s aerial aspirations and as a home school project by Patti to help Jessie learn the business side of circus. Even though Jessie was only thirteen, her first assignment was to call the CEO of the Golden Chamber Commerce and ask if she could perform for local events. He accepted and we needed a rig. So Ludwig designed and built his first new portable rig in two weeks to make the deadline. We've been working with Ludwig ever since! 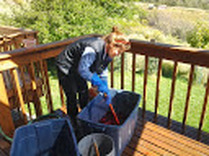 Patti's misspent youth was studying way too hard to be a chemical engineer.  That all changed when she married Rick. Along with being the admiral while sailing, Patti was in charge of "boat schooling" for Jessie. Patti believes in "youth-directed and parent-enabled" schooling and hence, Aerial Animals was born. Patti is responsible for marketing, product research, and daily operations. She enjoys being a circus mom. When people ask, "Doesn't it scare you to watch your daughter up there?", she replies, "No, I wish it was me!" 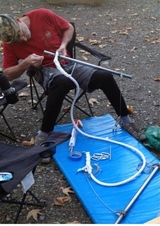 Rick grew up in Wyoming and has always been self-reliant. He demonstrated that in 2001, when he bought a 43 foot sailboat in the Caribbean, taught himself to sail, moved the family aboard, and sailed west. During that time Rick learned a lot about rigging, rope splicing and how to fix or make just about anything from materials at hand. We were surprised to find how many of his newly acquired sailing skills transferred to making circus equipment. Rick does all the rope/wire cable splicing and setting up for gigs and he was able to justify buying a welder, something he has wanted for a long time. 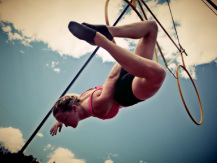 At age five, Jessica moved aboard a 43 foot sailboat with her parents and sailed around the world. It was during these early years that she learned how to fly. She spent every free moment of her time climbing the mast and swinging from the rigging. Upon returning to land-locked Colorado, she took up gymnastics, high flying trapeze, and, in turn, aerial fabric. After discovering the world of circus, she never looked back. She completed the Pro-Track program at the New England Center for Circus Arts and graduated with a BA Hons Degree from National Centre for Circus Arts in London in 2017. For her complete resume and booking information, please visit her website: Jessica Voler